A Shared Vision for Rebuilding the Church

Francis of Assisi and Pope Francis

The saint most beloved besides the Blessed Virgin Mary herself  is no doubt Saint Francis of Assisi (1181-1226). Revered by Catholics and by many who have no religious faith, his sparkling, joyous personality has made religious faith seem attractive and important. His statue adorns many a garden, including my own, and appropriately so because of his love of the natural world beautifully expressed in one of the first poems ever written in Italian, his Canticle of the Creatures.

When Blessed John Paul II assembled the first ever summit of world religious leaders to pray for peace in 1986, it was held in Assisi, for Saint Francis was a pioneer in initiating dialog between Islam and Christianity.

Jorge Mario Bergoglio, upon being elected pope, was the first pontiff in history to take the name Francis. The first pope ever from the Southern Hemisphere and from the Society of Jesus chose the name because, like Francis, he wants to rebuild the Church. “How I would like a Church which is poor and for the poor!” he confessed soon after his election on March 13, 2013. Becoming “poor” for both Pope Francis and Saint Francis means getting in touch with the basic demands of the Gospel of Jesus and striving literally to live them.

As a young man, Francesco (“the little French one”), so re-named by his merchant father who made regular business trips to France purchasing expensive cloth for his shop, had worked for his father and enjoyed all the privileges of wealth. He dreamed of a career in the military and all the glory attached to it. Assisi was then at war intermittently with neighboring Perugia and the Roman emperor. He enjoyed a full social life and became something of a troubadour attractive to all. Captured and injured in war, he was finally released to his family but seemed lost.

One day, a poor beggar came into his father’s shop asking for help.  Fearing he might disturb the customers, Francis shooed him away.  Then, rethinking his behavior, he pursued him and begged him to accept a donation. Later, outside the walls of the city, Francis encountered a leper asking for help.  Repulsed at the sight of this man who had wandered out of the leprosarium where people with this contagious disease were confined, Francis fled.  Again, he rethought what he had done, returned and embraced the man with the horrible skin disease. At the end of his life, Francis recalled this experience with the leper as a major turning point in his embrace of the cross.

After these incidents, Francis began spending time in prayer in a ruined chapel on the outskirts of town. One day while praying, Jesus from the cross addressed him, “Francis, rebuild my house for it is falling down.” Thinking at first that Jesus meant the tiny chapel, Francis impulsively went back to his father’s shop and stole a bolt of expensive cloth to have money for this project. His father was not pleased.

Taking his son before the bishop for trial, Francis’ father demanded full repayment, and the bishop agreed. It was then that Francis humiliated his father further by shedding the expensive clothing his father had given him to wear. “From now on,” he declared, “I will call no one my father except Our Father who art in heaven.” Then he added, “Uscii questo mondo,” which I translate as “I have left this kind of world.” From that point on, Francis would never boast except in the cross of our Lord Jesus Christ through whom the world was crucified to Him and He to the world.

On Holy Thursday, March 28, 2013, soon after his election, Pope Francis gave what we now have come to know as one of his typically powerful homilies. His topic, appropriately, was the meaning of ordained ministry.  Citing the prophet Isaiah, the pope urged that God’s anointed ones receive their anointing “to anoint God’s people whose servants they are.” You are anointed, he said, “for the poor, for prisoners, for the oppressed...the sick, the sorrowing, and the lonely.” That is to say, all the people who are “on the fringes” and “on the outskirts.”

In July, Pope Francis literally went out to people notoriously and scandalously on the fringes: refugees, mostly from Africa, trying to immigrate to Europe but left stranded on a four-mile strip of rock off the coast of Sicily, the island of Lampadusa. There, he said prayers for the many who have died trying to escape their poverty and offered words of encouragement to those still awaiting their fate. But mostly, the pope called the world’s attention to people most choose to forget. “We have forgotten how to cry,” he warned.

When Saint Francis sought Church approval for his new order of mendicant preachers, he presented himself to Pope Innocent III in Rome. Innocent, unimpressed by their appearance and their message, sent them away.  Then, that very night, in a dream now depicted on the walls of the Basilica of Saint Francis in Assisi , the pope had a vision of the roof of his own cathedral, the very Lateran Basilica where Pope Francis gave his Holy Thursday homily. In the vision, the roof was bout to collapse. It was being held up only upon the shoulders of the very man he had met that day and dismissed.

Upon the advice of the cardinals, who advised that if the pope sent the friars away what he was really saying was that the Gospel was too impractical to be lived, Pope Innocent gave approval for the friars to preach everywhere from then on.

In the next issue of Harvest, we will travel to Assisi, which Pope Francis visited in October.

Read the rest of the Focus on Francis Series:

March 2014 - Pilgrimage to Assisi
May 2014 - "Preach the Gospel always and, if necessary, use words."
July 2014 - The Canonizations of Two Men of Courage
September 2014 - Ten Lessons for Pastoral Leaders from Saint Francis of Assisi and Pope Francis 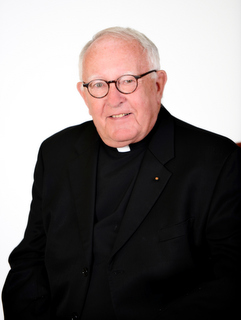 Throughout 2014, Monsignor Murphy offered his reflections on how Saint Francis of Assisi and Pope Francis share a vision for the Church  In addition to being the director of the diaconate for the diocese, Monsignor Murphy has authored numerous scholarly articles and books.    He is the former academic dean and rector of Pontifical North American College in Rome and served as part of the editorial group which, under Cardinal Josef Ratzinger, edited the Catechism of the Catholic Church.