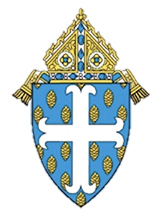 The present Diocese of Portland includes the entire state of Maine and is part of the Province of Boston. Established by Pope Pius IX on July 29, 1853, the Diocese of Portland then included the territorial limits of the present states of Maine and New Hampshire. Previous to that time, it was under the jurisdiction of the Bishop of Baltimore and later of the Bishop of Boston. In 1884, the diocese was divided and New Hampshire was established as a separate diocese with the Episcopal See located at Manchester. Bishop Robert P. Deeley, J.C.D., serves as Bishop of the Diocese of Portland.

The diocese presently has an area of 35,385 square miles and a population of 279,159 Catholics**. It is organized in the form of a corporation sole, the title of which is "Roman Catholic Bishop of Portland." In addition to its 141 churches, it has 10 Catholic schools and one Catholic college, Saint Joseph's College of Maine in Standish.

Within the diocese, there are also seven subsidized housing units, four rehabilitation and residence facilities, and three childcare centers. There are three Catholic hospitals operating independently of the diocese as well as Catholic Charities Maine, the state's largest social service agency, which operates as a separate corporation.

The Seal of the Diocese of Portland is composed of a field of blue on which is displayed a "scattering" of gold (yellow) pine cones. The coat of arms is based on the ancient French royal family coat of arms to reflect the fact that the first attempts to settle what is now the state of Maine were made by the French under Pierre du Guast Sieur de Monts, who received a royal patent from the King of France and planted a small colony on Montral (St. Croix) Island in the St. Croix River in 1604. In this design, the gold fleur-de-lis of the French royal family coat of arms have been replaced by gold (yellow) pine cones to reflect that Maine is "The Pine Tree State." The coat of arms of the Diocese of Portland has been in use since the diocese was erected by the Holy See in 1853.

Offices of the Roman Catholic Diocese of Portland are located at: