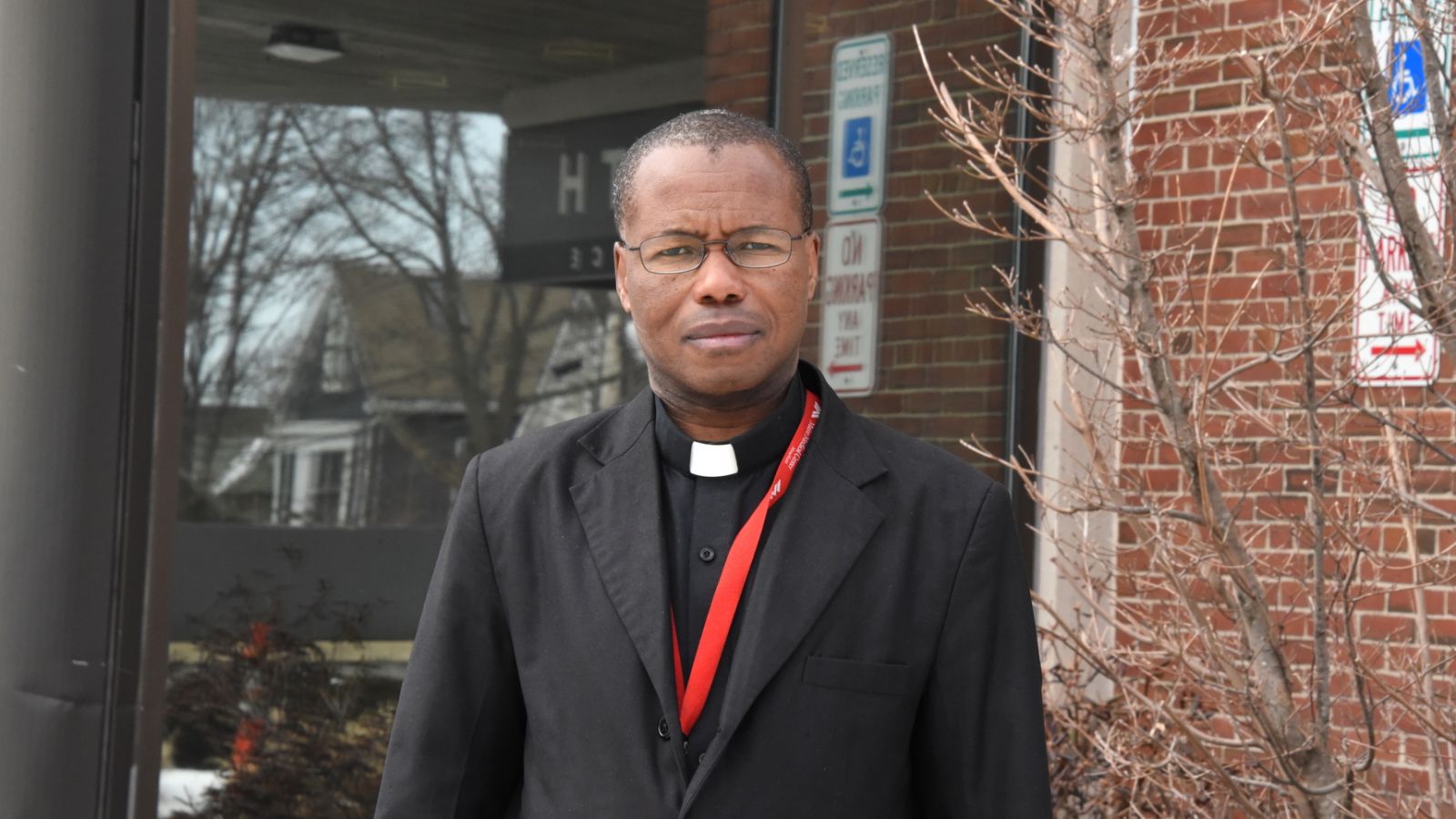 Challenging but enjoyable – that is how Father Kevin Upham describes his service as a hospital chaplain at Maine Medical Center (MMC) in Portland.

“Bringing some calm and some comfort and God’s love and mercy to those people who are in a very vulnerable place is something that I enjoy, but it is a challenge for sure,” he says.

Michael Vaughn, who serves as a part-time Catholic lay chaplain at MMC, says, for him, the ministry is a calling.

“I feel very fortunate just being able to do this,” he says. “I’m blessed to work with the great people who are there.”

Vaughn and Father Upham are part of a hospital ministry team that that also includes Father Amandus Sway, AJ, and Mary Brown, another part-time lay chaplain. They also receive assistance from Father Paul Marquis, who serves at nearby Northern Light Mercy Hospital. The chaplains work in partnership to provide spiritual care to patients who come from around the state.

“As a hospital chaplain, I support patients emotionally and spiritually. I talk with them. I visit them. I listen to their worries, and I encourage them,” says Father Sway.

“It does lift people up so that they feel better, whereas if they are alone, it can wear on a person,” says Father Upham. “The physical, the mental, and the spiritual are all connected.”

The priest chaplains and lay chaplains share responsibilities for visiting patients and bringing them the Eucharist, although the priests are also able to offer the sacrament of the anointing of the sick and to hear confessions, and they have nights when they are on call. 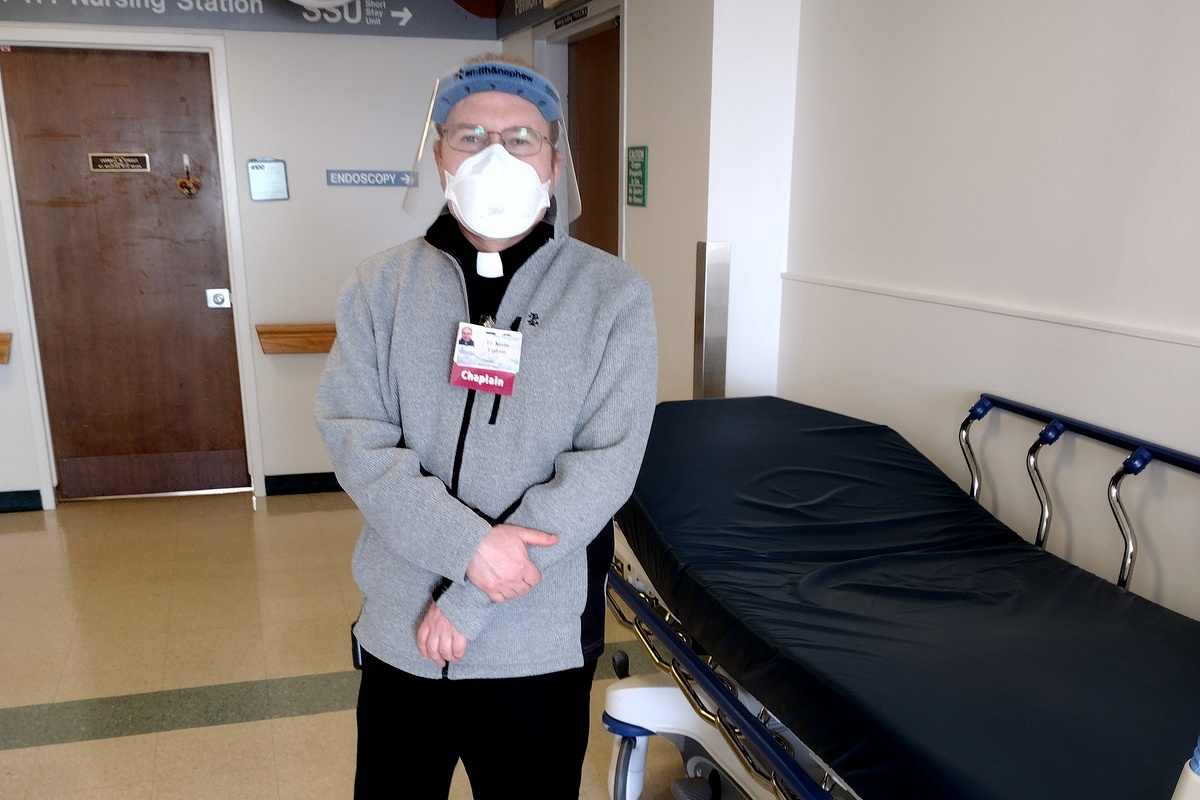 When the chaplains arrive at the hospital in the morning, a computer check will tell them who has asked to see a chaplain and which new patients have identified themselves as Catholic.

Those who have asked to see a chaplain are prioritized, followed by those who have yet to receive a spiritual care visit. Father Upham says while you want to visit everyone each day, it is not possible.

“My list is very long, and I know I’m not going to get anywhere near the end,” he says. “It’s like you’re never really done. You just have to stop.”

He says you have to trust in your fellow chaplains and in God’s providence and timing.

“You might miss patients, or you might not be aware of a patient, but then, you end up having an opportunity to see them at just the right moment. Sometimes, it’s the moment when they really needed to see somebody,” he says.

When the chaplains visit a patient, the type of a greeting they receive often depends on where a person is in his or her own spiritual journey.

“We have people who are practicing Catholics who want the visit and say, ‘Yes, this is wonderful.’ Then, we have people who haven’t been to church in a long time or aren’t practicing their faith. For them, it’s an opportunity to be reconciliated and to reevaluate. There is an opportunity for that because they are in this place where they are reevaluating some of that,” says Father Upham. 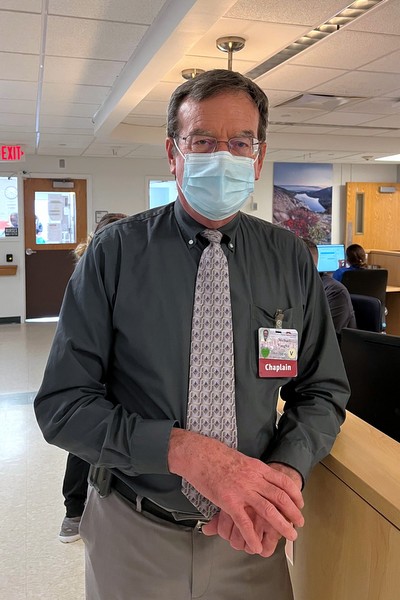 Vaughn, who reconnected with the Church after drifting away during his high school and college years, says his personal experience sometimes helps him with patients who have fallen away from their faith.

“I say, ‘Well, you know, it’s OK. I was away for 20 years, and if you ever told me then that I would be doing this now, I would have thought you were out of your mind.’ And the response I get is really amazing. Most of the time, they’ll say, ‘What happened?’ I think they ask that sometimes maybe as a way of saying, ‘Gee, do you think that could happen to me?’”

The chaplains say when they visit a patient, it’s not with an agenda in mind.

“I ask, ‘Is there anything I can do for you?’ Depending on how they are, it kind of goes from there,” says Father Upham.

“I don’t guide them,” says Father Sway. “I ask them, ‘How are you feeling?’ I ask about their families, how they are supported by their families, and where they belong, their church.”

Father Sway says the fact that he is a priest from Tanzania is often a conversation starter.

“Some of them, they love to learn about other parts of the world, and they are asking me about how I am experiencing Maine. Do you have snow in Tanzania? I say, no, that it’s different altogether, but it brings them nearer to me because they want to hear something,” he says.

Father Sway says sometimes patients who don’t think they would benefit from a spiritual care visit find the opposite to be true.

“You feel somebody changing and somebody opening up, somebody who had been looking like they never wanted to talk, but now, they’ve spent 20 minutes talking. Then, I feel like they have received something from me,” he says.

Although not all patients are English-speaking, Father Upham says it doesn’t prove to be an obstacle.

“We may not be able to communicate about anything specific, but we’re able to convey things,” he says. “Catholicism is kind of like its own language.”

He says he always keeps in mind that whenever he visits a patient, God is present.

“I always assure people of God’s love,” he says. “He provides that calm and that healing for us. God’s love and mercy is so great.”

Father Upham says it’s natural for people to wonder where God is amid a particularly difficult situation and says he stresses to patients the importance of being honest with God in their prayers.

“If you are in pain or if you are frustrated, it’s OK to bring that to God,” he says. “It’s important for them to be open with God and to be honest with God.”

As much as these chaplains bring to patients, they say they often get something in return.

“Some patients, they bring me also to Christ, because there are some who are so faithful, the Catholics who really trust in God. You find them in really difficult situations, but they have faith, and it gives you strength. It’s not only us giving them strength,” says Father Sway.

Vaughn says when he first started serving at the hospital as an extraordinary minister of holy Communion, he was often nervous about walking in to see patients, but it was through them that God gave him the affirmation he needed to continue with the ministry.

“I went to the chapel and I got the pyx with the hosts in it, and I said, ‘Alright, I’m going to walk out of here, but I need your support.’ And I went out and walked into the first room, and the patient there said, ‘Oh, thank God you’re here. You can’t believe how much this means to me, how much it means that you guys come and do this.’ The next one, the same thing happened. The next one, the same thing. Every single patient that I visited, there were probably 13 or 14 of them, went out of their way to tell me how important this was to them. I got back to the chapel, and I stood there for a minute. I was kind of smiling, and I said, ‘I get it. I’m supposed to do this.’”

Vaughn says that doesn’t mean that he still doesn’t get nervous at times, nor face difficult moments, such as seeing the heartbreak of a family confronted with a dire diagnosis.

“Sometimes, you find yourself sort of wandering away and maybe just kind of catching your breath,” he says.

“I have shed tears, although not when I’m with a patient,” says Father Upham. “I lift them up to God, and I just trust in God.”

While the work of the chaplains is always important, it became even more vital during the pandemic when loved ones were not allowed to visit patients.

“It’s so much better when they have their family or their friends coming. That’s part of their recovery, but what are you going to do?” says Vaughn.

He has high praise for hospital staff members, who he says have done an incredible job caring for patients during the pandemic. He says he and the other chaplains have tried to support the staff whenever possible, understanding the stress they have been under.

“It might be just for 30 seconds. How are you doing? What’s going on? Somebody might stop and just kind of need to get something off their chest,” says Vaughn. “Three weeks ago, a nurse got into the elevator, and she said, ‘Oh, a chaplain. I’ll take a prayer in the elevator.’ I’ve got an elevator ministry now.”

Whether it’s in an elevator, a hallway, or a patient’s bedside, the chaplains are ready to help wherever needed.

“It’s surprising what pops up in front of you and who needs what and where it's going to come from,” says Vaughn. “It’s such an important ministry.”

“It’s so important because some of the patients really need prayers, especially those who are so worried,” says Father Sway. “It feels good to be with patients.”